With thousands of schools still closed or partially closed across the country, millions of American families are struggling to find work-life balance while educating their children at home.

One part of American society may be receiving their own special COVID-19 relief package, however.

In Forbes, Adam Andrzejewski writes that a provision in the $1.9 trillion House bill—“the American Rescue Plan Act of 2021”—would allow federal employees to make up to $1,400 a week without working.

Buried on pages 305-306 of the legislation, the provision creates a $570 million fund for disbursements to federal employees who are not working because they are caring for others because of the coronavirus.

“Among those eligible are those who are ‘unable to work’ because they are caring for school-aged children not physically in school full time due to Covid-19 precautions,” writes Andrzejewski, the CEO and founder of OpenTheBooks.

Under the legislation, full-time federal employees are eligible for 600 hours in paid leave through September, receiving up to $35 an hour.

If you're wondering how federal employees were able wangle a $570 million paid leave fund (on your dime!) into that House bill so they can stay home and get paid while junior does remote learning, look no further.

The union $$ went in the right direction. pic.twitter.com/UWn0woFCmr

In some ways it might seem perfectly reasonable to allow employees to be paid while staying home. The circumstances are unique, after all, and many of us can empathize with parents struggling to work while schools are closed.

There are serious problems with this proposal, however. First, the legislation doesn’t distinguish between a school that is closed and one that simply allows children to learn remotely. As a result, federal employees could simply choose to have their child learn remotely and be eligible for benefits.

“Even if a federal employee’s child could be in school five days a week, if the school ‘makes optional’ virtual or hybrid schooling, it appears the parent can keep the son or daughter at home and still qualify for paid-time off under the bill,” Andrzejewsk writes.

Second, the legislation places no restrictions on a child’s age.

“An open question is whether parents of college-aged children could take paid time off?” Andrzejewsk writes. “Certainly, some colleges are virtual and there is no definition of son or daughter in the bill and no age parameters.” 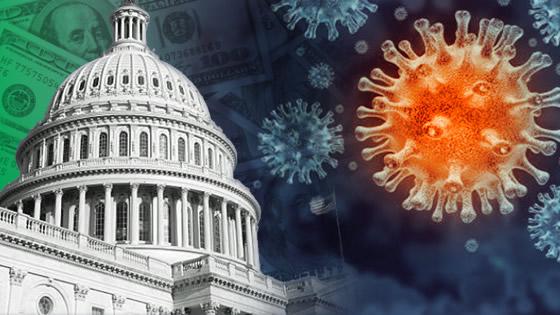 The biggest problem, however, is that this provision takes money from taxpayers and then hands it out to a specific constituency.

Wow. The BidenBucks bill pays federal employees up to 15 weeks of paid leave at $1400 per week if they have to stay home to virtual school kids.

Essentially, the $570 million is a special perk for a select segment of the US workforce: federal employees. According to the Congressional Research Service, there are roughly 2.1 million civilians in the federal workforce, many of whom are represented by labor unions.

If you're wondering how federal employees were able wangle a $570 million paid leave fund (on your dime!) into that House bill so they can stay home and get paid while junior does remote learning, look no further.

The union $$ went in the right direction. pic.twitter.com/UWn0woFCmr

Purchasing influence and perks—like 600 hours of paid leave—might sound crass or even seedy, but it's one of the primary purposes of unions.

As the economist Hans F. Sennholz observed, governments and unions are essentially “allies in interventionism.” They seek to circumvent free markets to seize and consume the wealth of others through coercive means. And in exchange for votes and influence, unions are rewarded by the politicians with special privileges for their members.

“Labor unions deliver political votes to administrations that promise to be friendly and cooperative,” wrote Sennholz, a longtime teacher of economics and former FEE president. “The administrations in return create legal privileges and immunities for labor unions so that they may be more effective in their economic struggle.”

If you think that sounds a bit like a quid pro quo, you’re not wrong. Unions have made it clear, even publicly, that they expect returns for all those dollars and door knocking.

“Those who would oppose, delay or derail this legislation, do not ask us—do not ask the labor movement—for a dollar or a door knock,” AFL-CIO union leader Richard Trumka warned lawmakers before a key House vote last year. “We won’t be coming.”

All workers like job perks, of course. And here is nothing wrong with receiving perks from an employer. But they should pass the test of the free market—not be mandated by the government or subsidized by taxpayers.

The economist Percy L. Greaves Jr. once explained the difference between how unions operate compared to free markets.

“The free market operates according to the Golden Rule. The higher values one contributes to the marketplace, as valued by consumers, the more one receives in return,” wrote Greaves Jr., a longtime writer for US News and World Report. “Free market operations are always voluntary transactions by which all parties exchange something they have for something on which they place a higher value.”

Many parents would no doubt desire having 600 hours in paid leave to stay home while their children do virtual learning—especially since newly issued CDC guidelines would keep 90 percent of schools at least partially closed.

Few of us will have that option, however. Because the action doesn’t make economic sense. It only makes political sense. But that's what matters when Congress spends trillions of our money. FEE’s Brad Polumbo recently highlighted 10 provisions in the $1.9 trillion stimulus bill that appear to be little more than “partisan kickbacks.”

Sadly, you can make this one number 11—and we’ve only just started looking.