SFC telecasts will bring live, high-stakes saltwater tournament action to viewers directly from the boats competing in the events from up to 200 miles offshore.

"This is a historic day for championship fishing," said Mark Neifeld, CEO & Commissioner of the Sport Fishing Championship. "Teaming up with CBS Sports to televise competitive saltwater angling will be the catalyst that elevates the sport to new heights."

The SFC offers a 12-event competition series that awards one grand champion in the sport of offshore fishing, beginning in April 2022 with the Louisiana Gulf Coast Billfish Classic and continuing through the final tour stop at the San Juan International Billfish Tournament in Puerto Rico. Teams earn points based on their placement in each qualifying tournament, plus are awarded additional points for every qualified catch throughout the season. The SFC awards four winners based on results from the 12-tournament regular season, which features three "championship fish" competitions and a points-based catch-and-release billfish championship. 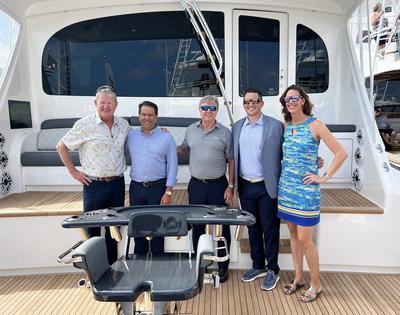 With millions of dollars on the line and mother nature constantly changing the playing field, the intensity, excitement, and adrenaline of chasing the world's largest game fish can be a life-changing experience for captains, anglers, and fans.

"The adrenaline and exhilaration of having a billfish on the line are unmatched in sports, and we are bringing our viewers right into the action and on board with competitors," Neifeld said. "The telecasts on CBS Sports Network will provide new access to the sport for millions of people across the continent and unrivaled access to championship saltwater fishing."

SFC coverage on CBS Sports Network will also feature live reporting from each tournament location and a live studio show featuring all the action leading up to the final day.

The final 2022 Sport Fishing Championship Inaugural Season Schedule will be released in the coming weeks at SportFishingChampionship.com.

About The Sport Fishing Championship
The Sport Fishing Championship (SFC) is the world's premier offshore fishing series, consisting of twelve points-based tournaments, culminating in one grand champion angling team. Competitors earn points based on their placement in SFC Qualifying Tournaments and additional points for every qualified catch recorded throughout the regular season. The top receives a substantial cash prize, as well as the prestigious SFC Championship Trophy. For more information about the SFC, visit SportFishingChampionship.com or follow on social @sportfishingchampionship.