A board game called Pandemic was a customer favorite early last year at Mr. Nice Guy Games in Monroeville.

“It was our No. 1 seller in February and March,” said Christy Kotwica, who owns the store with her husband, Ron Kotwica. “We ordered four times what we’d normally order, and they sold out.”

Working with other players to fight global disease outbreaks and find cures might have brought feelings of comfort and connection in the early days of the shutdown. Since then, gathering to play a game has remained a popular way to pass the time in isolation.

Ron Kotwica said interest in board games has been rising for a couple of years, but there’s been an added uptick during the pandemic.

“I think people were feeling like the world was too virtual, now with kids doing remote school and parents only working on Zoom,” Christy said. “Everything is virtual, so what’s their break time?

“There’s something to be said for bringing people together at the same table and interacting on common ground.”

The Kotwicas have been at the location on the perimeter of Monroeville Mall for about 8 years. Prior to that, they had a small store in Oakmont.

They’re doing what they love, Ron said: “We’ve played most of the games we sell.”

A recent favorite is Scythe, a strategy game in which players vie for natural resources and control of nations in an alternate-reality of war-torn 1920s Europe.

“We played seven times one night, and each game takes 30 minutes to an hour-and-a-half,” Ron said.

“We want to beat each other so bad, we kept saying, ‘Let’s play again,’” Christy added.

The Kotwicas specialize in games from smaller publishers, leaving the monster-sellers like Monopoly to the big box stores — except for special editions like Seinfeld or Bob Ross Monopoly. They stock 10 to 15 new games per week.

They and their staff will quiz customers on their likes, interests and playing partners in order to suggest games.

Prior to the imposition of gathering size limits, the store hosted a free Thursday night game session that would draw around 30 people.

In addition to Pandemic, these were the store’s 2020 top-sellers:

• Monikers — Players have three short rounds to guess names from a set of cards, with different clues given in each round.

• Secret Hitler — “A controversial theme, but a lot of fun. It’s another version of Clue,” Ron said.

Shirley McMarlin | Tribune-Review Secret Hitler is one of the top-selling board games at Mr. Nice Guy Games in Monroeville.

• Wingspan — An engine-building game in which players compete to attract birds to their wildlife reserves.

• Gloomhaven — A tactical combat game in which players take on the role of a wandering adventurer.

In our present uncertainties, board games are a throwback to a simpler time. They can occupy our time, distract us from worries, exercise our brains and provide interaction with others when so many usual social outlets are unavailable.

• Players gain a new sense of empowerment when they overcome the challenge posed by a game.

• Many games require players to work together to solve problems, enhancing socialization. Socialization occurs even when players are rivals.

• Board games can take people outside of themselves, to new situations or worlds, providing life experience from a different perspective.

Archaeologists at Neolithic sites in present-day Jordan, Syria and Iran have discovered stone and plaster slabs pocked with shallow divots that they suspect were boards for mancala-like games. If their supposition is correct, people were playing games about the time they began farming and residing in permanent settlements, between 6,000 and 10,000 years ago.

In 2013, researchers excavating a 5,000-year-old grave in Turkey found small stones, sculpted and painted to resemble animals and other shapes, along with dice and tokens made of shell, that they think are game pieces.

More than 100 boards have been found at sites across the Eastern Mediterranean and Middle East for the Game of Twenty Squares, or the Royal Game of Ur, dating back about 4,500 years. A stone tablet containing the rules was found in the ruins of Babylon in the late 19th century.

Betting on games is an old tradition, too. Among games from the Aztec Empire is patolli. To play, beans were tossed on a mat painted with squares in an X or cross shape; how they landed determined the score. Players and onlookers bet on the outcome.

Still being played today, the Chinese game of Wei Qi, or Go, dates back around 4,000 years. Wei Qi is mentioned in the Analects of Confucius and was one of the four arts of the ancient Chinese scholar, along with calligraphy, painting and the guqin musical instrument. 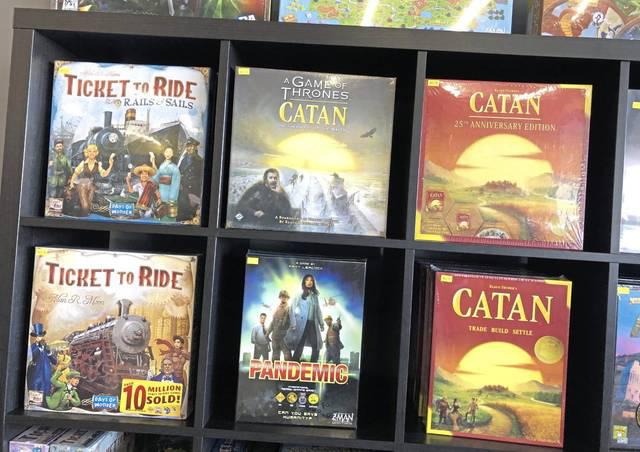 The worldwide market for board games is predicted to be more than $12 billion by 2023, according to moneyinc.com. Think of the games you’ve played most in your life, and you’ll probably list most — if not all — of the all-time top-sellers.

As the Kotwicas say, much of pandemic life centers around screens. Parents planning a device-free family night can consider their children’s interests before investing in board games. New York magazine compiled a list of “People’s Choice” kids games that received enthusiastic reviews on Amazon.

These were tops in selected categories:

• Best counting board game for young kids: Chutes and Ladders

Short on time? Short attention span? No patience for a long list of complicated rules? Apartment Therapy recommends these games that are quick to learn and play.

• Ghost Blitz: A speedy game that takes less than a minute to learn. Players compete to grab objects off the table that are revealed as cards are overturned. The first player to snag the correct object keeps the card; player accumulating the most cards wins.

• Skull: Players hold three cards with images of roses and and one bearing a skull, then bluff and bid to expose their opponents’ skull cards.

• Jenga: Build a tower of wooden blocks and then remove them one by one. Loser is the player who topples the tower.

• Tenzi: Roll your 10 dice as quickly as possible to get them all to land on the same number. For a greater challenge — and more laughs — buy the expansion pack that adds a twist to each round.

• Sushi Go: A fast-paced pick-a-card game with the goal of grabbing the best combination of sushi dishes as they pass by, with points for making the most maki rolls or collecting a full set of sashimi.

Definitely not for kids

Break out these games after you put the Candy Land board away and tuck the kids in for the night. They’re definitely not rated PG, according to spy.com.

• Cards Against Humanity: One player lays down a card that contains a sentence with a blank space. Other players fill in the blank using one of the cards in their hands. The results are risque, but hilarious.

• Exploding Kittens: Draw cards from the deck without finding an exploding kitten card. Draw one and you’re out of the game. Play specialty cards to thwart your opponents.

• Do or Drink: Do what the prompt tells you or take a sip of your drink. Prompts range from “attempt to do the worm or drink twice” to “spin the bottle and make out with the person it points to.” If your partner gives you the death glare, take two shots instead.

• Joking Hazard: One player starts a story by laying down two cards. Other players complete the story using a card from their hand. The dealer decides which story is funniest and player of that card wins the round. Card themes are “friendship, violence, sex and everything in between.”

• Game of Phones: Was it inevitable that a board game would involve smartphones? Prompts tell players to find an embarrassing selfie or a funny picture online. Players take turns competing and judging in this fast-paced game.

Tags： how to play battleship electronic game
Latest： Xbox Game Pass Ultimate Perks for May 2022: Discord Nitro, Paramount+, and all benefits
Next： The Evolution of Family Game Night
Popular Articles/span>