(ROCHESTER, NY)— It’s official! The educational American Girl Dolls, game-changing board game Risk, and universal plaything sand have been inducted today (Nov. 4, 2021) into the National Toy Hall of Fame. The honorees, unveiled during a special ceremony at The Strong National Museum of Play, were chosen from a field of 12 finalists that also included Battleship, billiards, Cabbage Patch Kids, Fisher-Price Corn Popper, Mahjong, Masters of the Universe, piñata, the Settlers of Catan, and toy fire engine.

About American Girl Dolls: Created in 1986 by educator Pleasant Rowland, the 18-inch American Girl dolls—and their accompanying books—explore America’s social and cultural history. Each historical doll comes with a unique narrative that fits her era, such as Molly McIntire, who is waiting for her father to return home from World War II. American Girl released the Truly Me 18-inch contemporary doll line in 1995 (originally under the name American Girl Today) to help girls express their individuality and build confidence.

Says Curator Michelle Parnett-Dwyer, “Rowland’s formula for combining doll play with history lessons worked, in her words, like ‘chocolate cake with vitamins.’ In an era when some education experts claimed that school curriculums paid little attention to history, this toy may well have filled a void. It now offers a range of dolls and stories of girls growing-up in America and promotes diversity in the world of dolls.”

About Risk: Based on the French game Le Conquete du Monde, Risk translates the hobby of wargaming with miniature figures into a mass-produced war and strategy board game. First published in the United States in 1959, Risk challenges players to control armies and conquer the world. The game’s innovative mechanics ignited renewed interest in strategy games in the 1970s and continues to influence the board game industry. 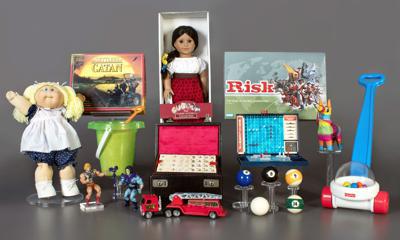 “Risk became one of the most popular board games of all time, inspiring a new corps of passionate gamers, and influencing other games which began the wargaming hobby—and by extension the Euro-games like The Settlers of Catan that many enjoy today,” says Curator Nicolas Ricketts.

About Sand: Sand may be the most universal and oldest toy in the world. Educator Maria Montessori has argued that sand “is only one substance that the modern child is allowed to handle quite freely.” Children recognize sand as a creative material suitable for pouring, scooping, sieving, raking, and measuring. Wet sand is even better, ready for kids to construct, shape, and sculpt. Sand provides unique opportunities for tactical, physical, cooperative, creative, and independent free play.

Chief Curator Christopher Bensch says, “Although some playthings can only be found online or in certain stores, sand has a global reach that most toy manufacturers would envy. It’s been a vehicle for play since prehistory, and anyone who has spent the day at the beach can understand the allure of this toy.”

About the National Toy Hall of Fame

The National Toy Hall of Fame® at The Strong, established in 1998, recognizes toys that have inspired creative play and enjoyed popularity over a sustained period. Each year, the prestigious hall inducts new honorees and showcases both new and historic versions of classic toys beloved by generations. Anyone can nominate a toy to the National Toy Hall of Fame. Final selections are made on the advice of historians, educators, and other individuals who exemplify learning, creativity, and discovery through their lives and careers. Toys are celebrated year-round in a state-of-the-art exhibit at The Strong museum in Rochester, New York. For more information about the hall and to see the list of previous inductees, visit toyhalloffame.org

About The Strong
The Strong is a highly interactive, collections-based museum devoted to the history and exploration of play. It is one of the largest history museums in the United States and one of the leading museums serving families. The Strong houses the world’s largest and most comprehensive collection of historical materials related to play and is home to the International Center for the History of Electronic Games, the National Toy Hall of Fame, the World Video Game Hall of Fame, the Brian Sutton-Smith Library and Archives of Play, the Woodbury School, and the American Journal of Play. Together, these enable a multifaceted array of research, exhibition, and other interpretive and educational activities that serve a diverse audience of adults, families, children, students, teachers, scholars, collectors, and others around the globe.

Tags： how to play battleship electronic game
Latest： The Toy Hall Of Fame Has Released The Finalists, Do You Have A Favorite? American Girl Dolls Battleship Billiards Cabbage Patch Kids Fisher-Price Corn Popper Mahjong Masters of the Universe toys The Piñata Sand The Settlers of Catan Toy Fire Engine
Next： At the Exponential Festival, Case Studies in Category Busting
Popular Articles/span>