A Tribute to the Nintendo Engineer Masayuki Uemura

It isn’t quite fair to call the engineer Masayuki Uemura, who died on December 6th, at the age of seventy-eight, an unsung architect of the global game industry. He is widely known among gamers for his work designing the Family Computer, the game console that became the Nintendo Entertainment System abroad, and its successor, the Super Famicom, known outside of Japan as the Super Nintendo. After retiring from Nintendo, in 2004, he remained deeply engaged with the industry, directing the Ritsumeikan Center for Game Studies in Kyoto until stepping down in March of this year.

Despite the cravings that Uemura’s machines invoked in the young—and not so young—customers who coveted them, his creations were inevitably overshadowed by the content that they were designed to serve up: the games themselves, the virtual adventures that were eagerly consumed by countless players around the planet. But these games would not have reached their destinations without Uemura’s consoles. Like bridges between worlds, his fantasy-delivery devices linked the Japanese and Western imaginations, with repercussions that are still being felt today.

Nintendo is revered as the home of Mario and Pokémon, a forge of fantasies with truly Earth-spanning pull, from Animal Crossing to The Legend of Zelda. But the company, founded in 1889 as a manufacturer of traditional gaming cards called hanafuda, struggled for relevance in the postwar era. In fits and starts of experimentation, Nintendo achieved a small measure of success by exploring new markets for playing cards, board games, and toys. Uemura joined in the early seventies. Nintendo’s R. & D. head, an engineer named Gunpei Yokoi, poached him from Sharp to assist in the building of amusements that used light-guns, in which customers shot beams at projections of targets on a movie screen. 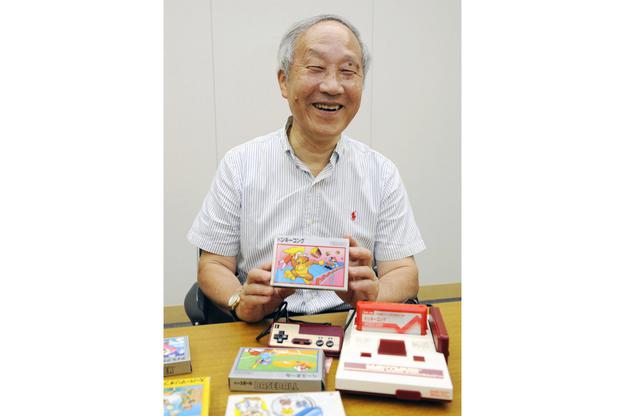 Nintendo, chasing what was then an emerging new trend, pivoted to video games. The company’s initial offerings were unremarkable clones of more innovative competitors’ work, such as Uemura’s 1977 Color-TV Game 6, a colorized imitation of Home Pong, or Space Fever, a near copy of Taito’s 1978 smash Space Invaders. It wasn’t until the early eighties that Nintendo found its stride, when such original arcade hits as Donkey Kong and Mario Bros. began attracting the attention, and quarters, of increasingly sophisticated gamers. Those titles were the brainchildren of a young designer named Shigeru Miyamoto, whose work would emerge as the face of Nintendo in the decades to come. But it is Uemura who delivered these digital dreams into homes around the world, letting creators like Miyamoto reach more hearts and minds than ever before. It was his handiwork that allowed Nintendo to develop, like a Pokémon gradually reaching its most-evolved form, from a regional concern into a global entertainment powerhouse.

Uemura’s Family Computer, better known by its nickname, the Famicom, emerged from a late-night conversation with the president of Nintendo, Hiroshi Yamauchi, in 1981. “President Yamauchi told me to make a video-game system, one that could play games on cartridges,” Uemura explained to me, in a 2019 interview. “He always liked to call me after he’d had a few drinks, so I didn’t think much of it. I just said, ‘Sure thing, boss,’ and hung up. It wasn’t until the next morning when he came up to me, sober, and said, ‘That thing we talked about—you’re on it?’ then it hit me: he was serious.”

It is a testament to Uemura’s skill as an engineer and manager that he was able to create “that thing” in just two years. The Famicom was, in essence, a miniaturized Donkey Kong machine, modified to accept cartridges, that could be plugged into a television. Although the Famicom represented an upgrade in computer power and design compared to American systems such as the dominant Atari 2600, it looked almost disarmingly colorful in its beige and maroon plastic shell—colors that had been picked by President Yamauchi based on a scarf that he liked to wear. At the press conference announcing its release, in the summer of 1983, Uemura fielded aggressive questions from reporters unconvinced by the toylike appearance of the Famicom. Industry wisdom held that dedicated home-game machines were a passing fad, soon to be replaced by personal computers. “What’s so interesting about it?” Uemura recalled one journalist pressing him. “It doesn’t even have a keyboard!” After his years of effort, “I was so deflated,” he recalled.

But, as it turned out, Uemura’s machine had arrived with uncanny timing. Alarmed at the pull that arcades were having on young people, parents and educators lobbied legislators to pass new laws regulating them. In 1984, Japanese legislators obliged by modifying a long-standing ordinance called the Businesses Affecting Public Morals Regulation Act, which regulated entry to bars, casinos, and adult shops, to include video-game arcades as well. The change took effect in early 1985, and represented one of the first efforts on the part of any nation to regulate access to video games. Parents and teachers stepped up local efforts to quash gaming, lest children wind up in one of these dens of digital iniquity. As a result, young Japanese turned instead to home game consoles, fuelling what came to be called the “Famicom Boom.” The Famicom proved so all-encompassing that a book called “Super Mario Bros.: The Complete Strategy Guide” topped the Japanese, non-manga, best-seller list for two years running.

The American version of the Famicom débuted in the autumn of 1985, redesigned in stylish grays and blacks intended to evoke high-tech consumer electronics, and rechristened as the Nintendo Entertainment System. The consensus of American toy-and-game-industry insiders was that Nintendo was foolish. It was two years after the shocking collapse of the American titan Atari, which had until recently controlled some eighty per cent of the U.S. game market. The California-based firm was, in many ways, the prototypical Silicon Valley startup, with a twentysomething founder and a work-hard-party-harder culture. (One of its early hires, a young Steve Jobs, recalled that “the smell of marijuana ran freely through the air-conditioning system.”) Atari was the pioneer that had manufactured the first hit arcade game, Pong, in 1972, and then the mega-hit home-gaming console the Atari V.C.S. (later renamed the Atari 2600), in 1977. But, as the eighties dawned, a combination of mismanagement and increased competition from personal computers flipped the company’s fortunes. An outsized investment in a rushed, poorly received adaptation of Steven Spielberg’s film “E.T. The Extra-Terrestrial” devastated the firm’s finances. Supply so outstripped demand that Atari famously buried many thousands ofunsold copies of the “E.T.” game in a landfill. The implosion of the industry leader shook rivals and suppliers, ushering in what is now known as the video-game crash of 1983. The U.S. industry began to resemble the radioactive ruins at the end of a round of Missile Command: a multibillion-dollar marketplace reduced to just a fraction of its former self over the space of a couple years.

In the wake of the crash, according to “Game Over” by David Sheff, the very mention of home gaming was taboo among toy-company buyers. “It would be easier,” one former toy executive told a Nintendo representative who wanted to sell the Japanese console in the States, “to sell Popsicles in the Arctic.” Yet, thanks to that crash, Uemura’s brainchild arrived on American shores virtually unopposed by any real competition. I was thirteen when the rumors of a new gaming machine began swirling through my suburban American neighborhood, spurred by news reports, magazine articles, and the schoolyard whisper network. Once we got wind of the existence of the N.E.S., my friends and I knew only one thing: we wanted this new gadget, and we wanted it badly.