'A great night out': For Worcester area dart leagues, it's about camaraderie, competition

It’s a bustling Wednesday night at the Vernon Hill American Legion Post 435, and blues and classic rock are playing on the speakers. The patrons are engaged in lively conversations, and the beer and whiskey are flowing.

Worcester mechanic Mike Lamusta steps casually to the line at the dartboard. He’s engaged in a doubles match of 501 — the objective of 501 is to accumulate 501 points exactly and then hit the outer ring of the dartboard to finish the game— and is trying to hit the double 20. With all the hubbub and carousing, one might think it’s just a casual, friendly game of darts, but it’s actually the final round of the Worcester A3 dart league before the Worcester Dart League quarterfinal matches, with this match deciding where the Vernon Hill Post’s team and their opponents, representing the Hitching Post on Cambridge Street in Worcester, will fall in the tournament brackets.

The scene’s a little chaotic, without even the pretense of formality that comes with amateur sports. An outside observer might even miss that the match has begun, even as Lamusta moves to 309 points on the electronic scoreboard, compared to his opponent’s 343. Still, for all its raucousness, one thing is clear as the match gets into full swing: Everyone is having a blast.

Lamusta is actually the former captain of his team, Feel the Vern (as in Vernon Hill), but he passed the torch at the beginning of this last season. “Now I can just show up and do my thing — focus on me and my darts,” he said.

Lamusta, along with the rest of Feel the Vern, is part of the A3 league. When he first began 12 years ago, he was a “C,” which is the lowest tournament division. Despite climbing the rankings, it’s clear that no one has lost sight of the primary goal to have fun with your friends. “You get one free beer wherever you go halfway,” said Lamusta, “a great time with great people — it's a great night out.”

The new team captain, Luke Kowalski, agreed that the camaraderie is the main draw. “Getting out on a Wednesday night, seeing people, having a beer, I think that’s what attracts people to play,” he said.

Though he now lives in Franklin, he grew up in Worcester, and gatherings like the darts league help him stay in touch with his roots — three members of his team are former high school classmates. “I feel like once you’re a Worcesterite, you’re always a Worcesterite, and that was part of the reason I just feel comfortable here.” 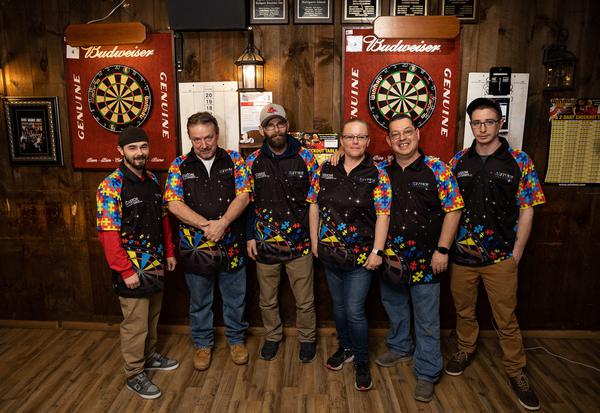 On target with community

In the match against the Hitching Post team, Jimi Hendrix’s “Little Wing” is playing on the speakers, and there’s a very real level where the scene feels suspended in time, like this game could be being played in the ‘80s or ‘90 without much differences. In a lot of ways, aside from the scoreboard, there’s been no real technological innovations in the sport, and in a city that seems to be changing at a rapid pace, there’s something reassuring about that.

The tournament has moved on to rounds of “cricket,” where the players have to “close out” parts of the board by hitting the 15 through 20 marks, as well as the bullseye, repeatedly. Kowalski lands a hit on the 15, but falls behind and tries to make up points on the bullseye.

The Hitching Post team pulls ahead by 70 points, but it’s just one game out of 12. “Vern” team member Kenny Perron soon after takes another round of 501 after a nerve-wracking streak of both he and his opponent busting, or “over-scoring,” past 501. You have to get the score right on the money.

The cheers are loud with congratulations, seemingly from both teams. Indeed, it’s difficult to tell at a glance who is on which team. Sometimes, teams wear matching shirts or jackets, but that's not the case this night. Here, everyone is in casual dress and mingling.

For Kowalski, that interaction is part of the point. He sees it as an opportunity to meet new people and expand one’s social circle. “Playing darts, especially in this city, you get to know a variety of people from different backgrounds,” said Kowalski, which allows him to connect with people he wouldn’t have under normal circumstances.“Mike [Lamusta] does my car repair, I met my electrician here and I got advice from a plumber who did a visit,” he said. “The meet-up is very important.”

The league is set up to be welcoming to newcomers, with the ranking system designed to make sure players of about equal skill are matched together. “You’re going to be bad when you first start,” Kowalski said bluntly, but that shouldn’t discourage anyone. “Practice is key, you don’t get good overnight.”

Steve Krikorian could be the exception that proves the rule. Though he only started playing six years ago, when he met some old high school friends after having gone to the bar to play pool, the Shrewsbury resident is now ranked 50th in the country by the American Darts Association.

Now he plays in tournaments throughout the region and even the country, and is the league secretary, a post he took on just before COVID. In the time the Worcester League proper was on hiatus, Krikorian ran three seasons of the Worcester COVID Dart League.

“Experienced players take it seriously but also want to help people get better.”

Tags： how to make an electronic matching game
Latest： NFTs in metaverse gaming: Taking a view on Regulatory, IP and Transactional implications from a German law perspective Blog Connect on Tech
Next： Vampire: The Masquerade – Swansong review
Popular Articles/span>