The survival of a girl who drifts around in a world that was submerged in water!

An Idle Game from Team Tapas where players take on the role of a girl trying to survive a flooded earth with only a raft and a fishing rod. From a tiny outcropping of rock in the Pacific, the unnamed drifter sets sail to explore the oceans, befriend other survivors, and search for answers about what caused the end of the world. 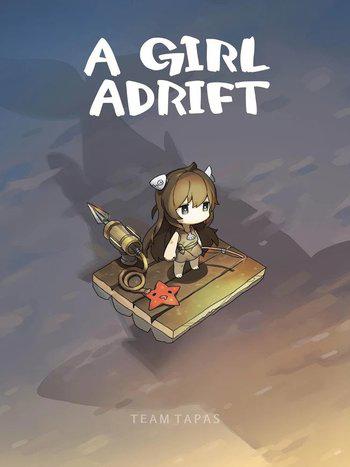 Gameplay revolves around catching fish and collecting resources to upgrade fishing equipment. Players travel between their home base, fishing areas where rare creatures can be caught, and Harbors run by the few survivors of the rising waters. Harbors allow players to sell any treasure they find, purchase skins to upgrade their abilities, and receive quests that expand the world map and push the story along.

A Girl Adrift Provides Examples Of:

Action Survivor: The player character fishes for and fights HUGE sea monsters with nothing but a fishing pole and a harpoon at first. She later adds a bit more firepower to her arsenal (including a machine gun and a magic crystal that can shoot lasers), but every day is a battle for survival against increasingly powerful fish. Ad Reward: After defeating a Legendary fish, you can watch an ad to double your loot. After the End: The world has been overtaken by a cataclysmic flood, with tiny bits of land dotted with the Ruins of the Modern Age poking out of the sea scattered hundreds of miles apart. Survivors are few and far between. Alice Allusion: The March time-limited skin event, "Alice's Tea Time Event," is based on Alice's Adventures in Wonderland. It includes: a Dress Skin of a blue dress with white apron a Hat Skin of a top hat decorated with heart-suite playing card a Hair Skin of blonde pigtails, also decorated with a heart and a spade a Fishing Rod Skin that turns the fishing pole into a magical rod topped with a tea pot a Boat Skin that transforms the raft into a tea cart complete with rose bushes, glowing mushrooms, playing cards, and a clock face bearing the outline of a rabbit's head and ears a Cat Skin that transforms the feline companion into a Cheshire Cat a Lantern Skin shaped like a giant glowing mushroom a Storage Chest skin shaped like a tea tower and sandwich platter and Weapon Skins that turn the turrets, machine gun, and crystal into tea pots April Fools' Plot: The April Fools' Day Event includes a special quest from Busan, who gifts players with a Dress, Wig, and Hat skin that are copies of her outfit and sends them off to make the Cat Witch laugh.The Cat Witch then sends players off the Sydney, where Wallaby sends players off to Lusaka, where Hugo sends players Norway, where Reindeer sends players to New York, who finally sends players back to Busan to report on the status of her prank. Cartography Sidequest: Locations only appear on the world map after an NPC gives players a quest at that location. After filling in the world mapanother map gets appended to the Pacific Ocean, allowing players to travel seamless into an "otherworldly" sea. Chainsaw Good: The "Bitter Sweet Valentine" monthly event for February offers a hot pink, heart-bedazzled chainsaw re-skin of the fishing rod called the "Chocolate Chainsaws" [sic].

The obstacles that block love will be cut with chainsaws. ☆

Civilized Animal: Most of the animal NPCs appear to walk on two legs and have human-like features: The Cat Witch from the Alchemy area has human-like hair, walks on two legs, and wears a full witchy getup. Wallaby in Sydney Harbor wears a shirt and plays the guitar. The Reindeer in Norway Harbor wears a hat and a belt. The Junk Man in the middle of the Atlantic Ocean is a chinchilla who wears a hat and glasses. Kathy the Cat in New York City Harbor walks on two legs, wears a hat and a scarf, and carries a briefcase. The Octopus at Imphomus Harbor wears a maid dress and has a distinctly humanoid facial expressions, despite her tentacle arms and legs.
Tags： a girl adrift game news about others
Latest： What is the rarest game console? - BoardGamesTips
Next： How To Play Xbox One Games on Your PC - Alphr
Popular Articles/span>