As you've probably heard, there's a movie opening next weekend based on Battleship, the classic pick-your-coordinates board game. Of course, watching somebody pick coordinates for two hours wouldn't be very exciting. Besides, there really aren't a lot of big naval battles happening these days with battleships — nobody has any active battleships anymore. So, naturally, the Powers That Be decided to throw something else at the Navy: aliens. 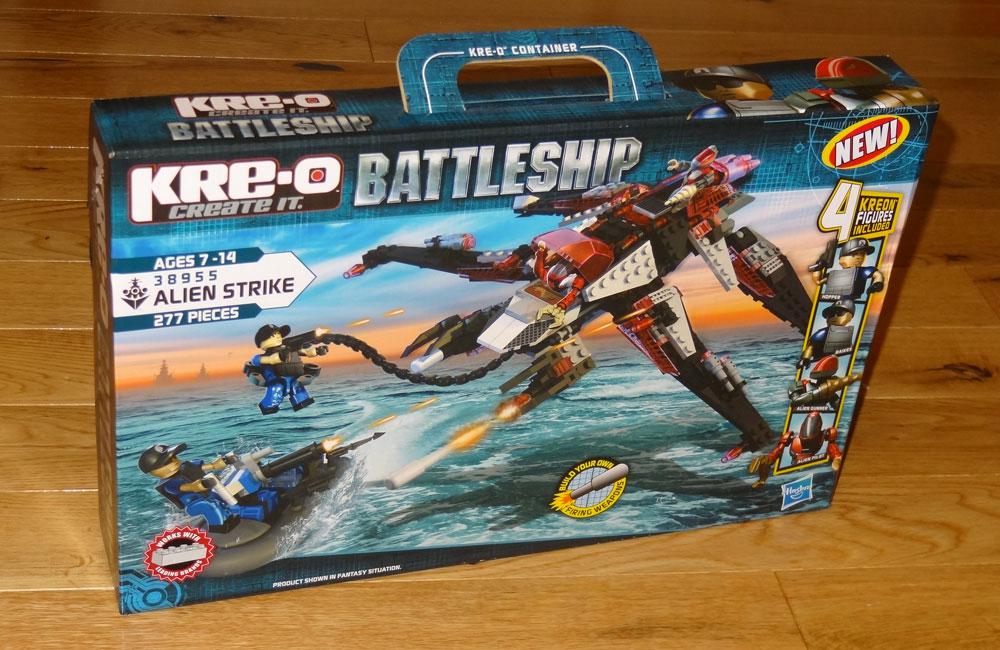 Really, that's mostly all I know about the movie — for the most part, it feels like a big summer popcorn action flick, lots of explosions and special effects, and it's getting mocked particularly because everyone wonders why it's a movie based on a board game, rather than just calling it something like "Sailors vs. Aliens." Personally, I wonder if the Battleship name is a benefit or not: would there be all this backlash if it had just been a new title?

At any rate, Hasbro has been pulling out all the stops on the tie-in side of things: new versions of the board game, both analog and electronic, featuring the alien opponents; a first-person-shooter videogame coming that reminds me of Halo; an update to the iOS app that adds the aliens.

The best part of all this movie tie-in merchandising, though, is the Kre-O toys. More specifically, the U.S.S. Missouri set.

This is actually my first experience with Kre-O, and there are some interesting differences between Kre-O and Lego. The minifigs were the first thing we assembled, of course, since my kids wanted to get right to playing with the people and aliens. The people are actually quite a bit more flexible than Lego minifigs: they can pivot at the waist, and the arms and legs are attached with ball joints rather than just pivots, which allows you to pose them in ways that Lego minifigs can't. The heads are also a different shape: instead of being round cylinders, they have a jawline and a chin. The alien minifigs are a little simpler, reminding me somewhat of the Clone Trooper figurine from Star Wars Lego.

The U.S.S. Missouri set has 545 pieces total, including five figures (three humans and two aliens). There are a slew of little guns and walkie-talkies and other accessories, plus a rocket glider for the aliens. But the real focus of the set is the battleship itself, over 20" long and 10" high when it's fully assembled. It's bristling with guns, including two big spring-loaded dual missile launchers which actually fire. There are a host of details which are revealed as the three layers are separated — it's a cool design that lets you open everything up easily, from the brig to the crew quarters (including a toilet and sink and a newspaper to read while you do your business), ship controls and sick bay, and extra life jackets on the railing.

One other difference between Kre-O and Lego that isn't so great is that the connections don't feel as tight. The plastic feels a little softer somehow, and there are a lot of bits (particularly on the Alien Strike set) which fall off at the slightest jostling. I suppose it makes it easier to take things apart, but you really don't want a battleship or alien spaceship that loses gun turrets when you move it.

Tags： how to play battleship electronic game
Latest： The Spokesman-Review Newspaper The Spokesman-Review From Monopoly to Battleship, the 10 best board games to play at home Kurt Vile to make his Spokane debut at Knitting Factory: ‘There’s very little to be bummed about’
Next： A Different Way to Play Battleship
Popular Articles/span>