800 titles up for grabs at Asheville's new, improved board game oasis

Owners Kevan Frazier and Steve Green found it appropriate to have a phoenix represent Well Played Board Game Café. It is, after all, the rebirth of the café that closed during the COVID-19 pandemic and is preparing to reopen this winter.

It’s been more than a year since it closed, but the entrepreneurs are planning a strong comeback.

In March 2020, the business shut down amid the COVID-19 pandemic. In August 2020, the owners pivoted services to offer take-home board game rentals, snacks and beverages. Despite changes to the business model and relief funding, the café was “limping along,” Frazier said.

“We did OK with that, but it was nowhere near enough to sustain the business,” Frazier said.

In October 2020, Well Played closed and everything inside was put in storage.

“We were disappointed when we had to shut down at Wall Street, and the community let us know that, too. I think they were as sad as we were,” Green said.

By summer 2021, the decision was made to try to give the café another go.

“We did some real deep soul searching because it’s definitely a big enterprise to jump back with it,” Frazier said. “But we felt that it was really important to have back in our community. We had such a kind outpouring of support during all that time. Folks said they missed Well Played and there being a place like that.”

Initially, Well Played’s founding was motivated by the board gaming culture’s growth.

In 2016, the partners learned about board game cafés' increasing popularity, followed by a trip to Toronto to visit the first recorded board game café in North America.

“We felt it was the total Asheville vibe,” Frazier said. “We wanted to create a place where everybody could gather and feel totally welcomed there and just have fun.”

They developed a plan for a local board game café that would be family-friendly but geared toward older demographics.

“A part of our framework is for adults to come have fun,” Frazier said.

Another purpose was to get people to disconnect electronic devices in a technology-driven world and reconnect with other humans.

“The reemergence of Well Played is interesting,” Green said. “We always started Well Played with the idea of putting gadgets down and unplug everything and have conversations with people over board games. Now, it feels like it’s even more important with the pandemic to bring people back together."

Well Played opened with a built-in board game community that continues to evolve. The board gaming culture has grown tremendously in the past 20 years, attributed to the release of the German game, Settlers of Catan, Frazier said. 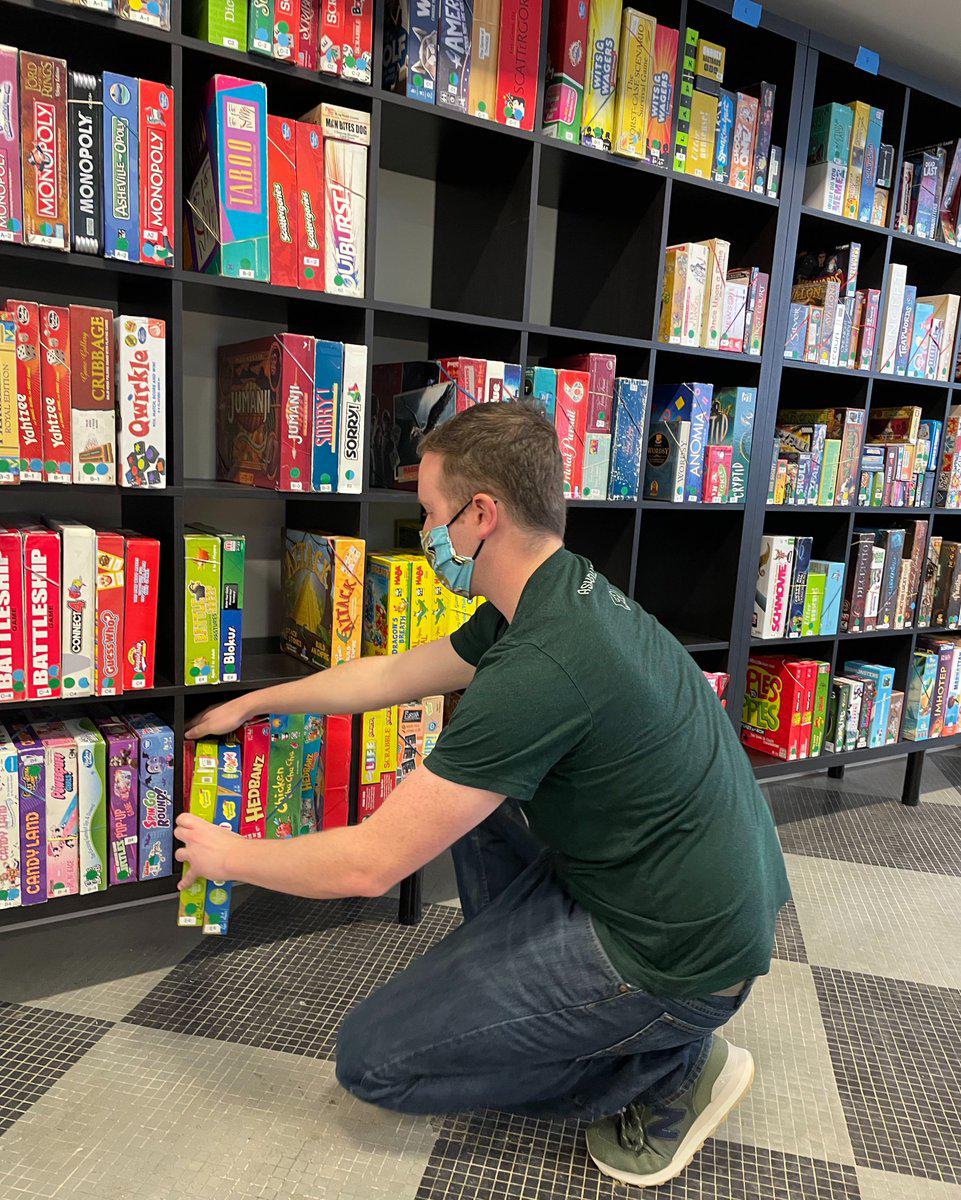 “In the past 10 years it’s continued to grow and in the past five year’s it’s through the roof,” Frazier said.

There’s a board game designer community in Asheville, as well, Frazier said. And on March 11-13, MACE West Tabletop Gaming Convention will be hosted at the DoubleTree by Hilton Hotel Asheville.

Frazier knows of a few board game clubs that have formed locally, including the Asheville Board Game Club, which works to strengthen the gaming community.

Board game enthusiast Sam Lee noticed the rise over the last two decades, too, he said. He and his wife, Alicia, embraced that part of the "nerd culture" — which has become mainstream. The interest in board games may have become more prevalent during the pandemic.

"It’s not to say board game cafes are the only sign of the adult board gaming community, but I think it’s a good indicator," Lee said. "COVID especially has had an impact on people’s interest in playing games. It is what a lot of people turned to in the past couple of years as something to do — stay in and still have fun. As things have opened up again, it’s a great way for people to get back out and socialize in a way that feels comfortable. It’s not large crowds at a busy bar. It’s everybody at their own table in their little pods.”

Lee and his wife began to play board games regularly with friends in the Raleigh area.

“As a person – a millennial – looking to have a social life, there isn’t a lot of things to do other than go to bars around town or concerts," Lee said. "If you’re going out on any given weeknight and you don’t drink, you end up in a bar and you don’t really have anything there that’s specifically for you.”

Guests don't have to know how to play games to attend ABGC or to visit Well Played.

At Well Played, guests choose which of the more than 800 games to play at their table. The staff is well-versed in the games to assist new players, Frazier said.

“We want folks to see Well Played as the center of board gaming in Asheville and an easy place to come to,” Frazier said.

There’s no limit to how many games guests can play. A game fee is charged that gives players access to play for the whole day. They can play, leave, come back and play some more during that business day.

“Locals will also have monthly, quarterly and yearly passes, as well,” Frazier said.

Food and beverages can be purchased and taken to their table. The menu will feature small plates, including snacks, dips, pretzel bites, sandwiches, shakes and ice cream.

"People knew us for these gigantic cookies that we did. We’ll continue to do those," Frazier said.

The business hours are to be determined but will be extended to cater to morning, afternoon and evening guests, he said. The café will operate more like a coffee shop in the morning, with a more robust coffee program. Beer, wine and a selection of cocktails will be on the drinks menu, too.

“We try to take care of folks from stem to stern when they’re in there,” Frazier said. “Sort of when you go over to your friend’s house and their parents would take care of you while you’re playing board games.”

Returned games will be sanitized by an ozonator – a machine that produces ozone in an area – before they’re reshelved, he said.

“We will do everything we can do to make it clean and safe for everybody,” he said.

Parties may sit at individual tables or in the lounge equipped with sofas and chairs. An outdoor seating area is planned.

“This is a much bigger space than we had before,” Frazier said. “We think our capacity is going to be somewhere between 130-140 people. It’s a big space, so people will be able to be comfortable.”

“I can’t imagine the upward trend of board gaming changing anytime soon. Everybody enjoys a good board game,” Green said.

Tiana Kennell is the food and dining reporter for the Asheville Citizen Times, part of the USA Today Network. Email her at tkennell@citizentimes.com or follow her on Twitter/Instagram @PrincessOfPage.