The 48th Annual Bayou Classic returns to New Orleans and the Caesars Superdome for the annual clash between Grambling State University and Southern University with ground-breaking news for the NCAA.

The 48th Annual Bayou Classic returns to New Orleans and the Caesars Superdome for the annual clash between Grambling State University and Southern University with ground-breaking news for the NCAA.

On Monday, the NCAA's associate director of communications, Greg Johnson, announced the "NCAA Football Rules Committee approved a waiver for in-game coach-to-player electronic communication in the Grambling-Southern University game to be played Saturday in New Orleans." 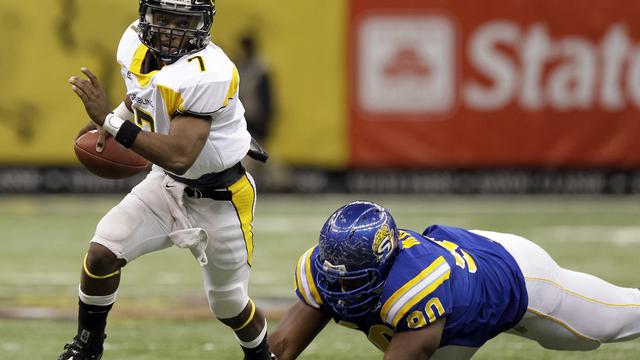 The news is ground-breaking for the NCAA to test the system with HBCU football programs. Southern and Grambling head coaches will be allowed the communicate directly with one designated player on the playing field through the player's helmet. Either the quarterback or the defensive on-field play caller would have the electronic receiver in their helmets to listen to coaches' communications.

Coach-to-player electronic communication has existed in the National Football League for many years but was officially implemented over two decades ago.

According to the NFL, "the experiment with electronic coach-to-player communications began in 1956. According to the Pro Football Hall of Fame, that’s when Ohio inventors John Campbell and George Sarles presented Hall of Fame coach Paul Brown of the Cleveland Browns with a radio receiver they had developed."

The following is the official NCAA details outlining how the coach-to-player electronic communications system will function on Saturday in the 48th Annual Bayou Classic.

This technology waiver will carry the following requirements:

"This can be a game changer for college football," said Jason Rollins, interim head coach at Southern University. "When we found out that we were going to have this opportunity, we called around and spoke to a few (NFL) people on how this can help. They all had positive things to say. It keeps the players focused on the game plan and how a play should be executed."