40 Years Of Simon, The Electronic Game That Never Stops Reinventing Itself

“Many more complicated games came and went,” notes Randy Klimpert, the current director of design and development for the Simon brand at Hasbro, which acquired Milton Bradley in 1984. “The simplicity of the play and the very basic, spartan elements, I think, are what makes Simon classic and also gives us the opportunity to keep updating it.” 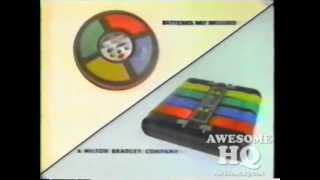 Simon was a multiplayer game from the start. Players would sit around the glowing object centered on a table, like a crystal ball at a seance. But Klimpert says the product’s stationary nature was less of a conscious design decision than it was a limitation of technology at the time: “The original Simon was huge. It wasn’t very portable. It needed four D batteries. It necessarily needed to take up space.”

“With Simon, it’s the core basic gameplay that’s so compelling, but it’s also done in such an attractive package,” says J.P. Dyson, director of the International Center for the History of Electronic Games in Rochester, NY. “It’s the lights, the sounds,” He cites Simon’s social aspect as contributing to its early success, comparing it to Pokémon Go versus the virtual reality headset-like isolation that characterized earlier handheld electronic games.