Talk about your experience as a student. What is your major/minor? Did you participate in any other activities or campus organizations other than football?
I am an Economics major with an emphasis in Data Science Analysis. This upcoming summer, I will be working with the New York Thoroughbred Horsemen’s Association.

What do your teammates say is your best quality?
I would hope that they would say that I am very trustworthy and reliable. I like being a team leader that others can look at as a good example.

What kind of role do you see yourself in on the team? What scheme and/or position suits your skill set?
This past season, I had the most success on the defensive line as the A gap defender, playing the 0, 1 or 2i. My best skill set is being the power player and stopping the run. That’s where I’m utilized best and am able to take on double teams. I’ve also played a lot on special teams including playing the shield on punts.

Who is the best player you have ever played against in college?
There’s a lot of good competition in the Ivy League. Jake Guidone was a lineman at Dartmouth who recently transferred to UConn. He’s one of the most competitive players that I’ve faced. We battled well throughout our game, and he did a good job all year.

Which one of your teammates impresses you the most?
We have an amazing group of seniors that have really impressed me. One of the guys that doesn’t get a lot of recognition is Reid Nickerson who’s a great friend. He plays defensive end in our system. Day in and day out, he does his job very well, impacting the game in many ways as a pass rusher and run defender.

One of the most impressive guys is our captain, Nick Gargiulo. For those that don’t know, Yale only elects one captain during the regular season, and Nick is our leader and very well-respected. He was very impressive in 3 games before the Dartmouth game where he was injured. Despite going down, his leadership was still evident, helping many teammates on and off the field. 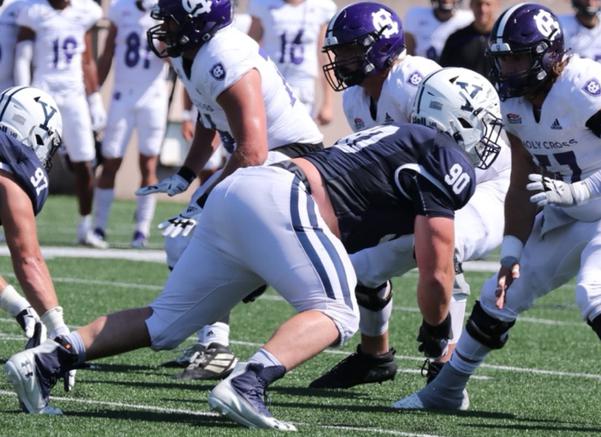 Describe a time in your life when you were able to overcome a struggle.
The COVID pandemic year of 2020 was very challenging. I took a semester off as did many of my teammates so that we could continue to play another season. Yet, unlike your typical player, I had to go back to my home in Basingstoke, England. I was cut off from the rest of my teammates and couldn’t go back to the US. I was stuck at home for 9 months while there were football events that took place that I couldn’t attend. I would have loved to have been there in person, but I had to make it work on my own.

I wasn’t where I wanted to be the previous season, and I knew I had to get better. So, I used steel weights in my home garage and worked all summer. I ended up transforming my body into a much better athlete for my position. When I got back to Yale, I had broken the school record for the amount of muscle mass, and I eventually earned a starting position at DT.

Looking back at that time, I can appreciate that struggle because it allowed me to push through and become the player that I needed to be.

If you didn’t play football, what other sport would you play?
Growing up in England, American Football isn’t what many kids are playing. I played soccer when I was a kid up until high school. I eventually grew so big that it made more sense to play American Football. I also enjoyed playing cricket over the summers, and I was a pretty fast bowler.

What is something that you are most proud of? What would you say is your biggest achievement?
During this spring, I was named an off-season captain. I had 10-11 guys under me that I would help mentor. It’s really fulfilling to be trusted by our coaches and contribute towards the success of others. I feel like I have made a real difference in people, and that’s something that I’m proud of.

Describe one of the most memorable plays of your collegiate career.
Last season during our week against Columbia, we knew they were going to be a challenge. It was a home game which was cloudy and rainy. I felt that I made a good impact in that game, shutting down the run game. Towards the end of the game on one of the last plays, I was able to break the line, chase down the QB and get the sack, sealing our win.

Do you have a favorite athlete or professional team? Is there a player that you model your game after?
Some of the players that I always seek out film on are Vita Vea and DaRon Payne. Vita Vea is just so strong, and he’s a nightmare for offenses. DaRon Payne is just the prototype player. He has great technique and gets off the line really well. I figure that if I can play even a bit like them then I can have success.

Who is your favorite music artist? What gets you pumped before a game?
One of my favorite artists is an English band called Chase & Status. I like listening to them pre-game. They have a good electronic sound.

What is your favorite comfort food?
In New Haven, there’s a place called Bear’s Smokehouse BBQ. I love getting their 3-meat combo. Their pulled pork and mac & cheese are unreal.

Do you have a favorite movie, TV show or actor?
My favorite trilogy of all-time is Lord of the Rings.

What do you do in your spare time? Do you have any hobbies? Any secret talents?
Outside of football, I’m still a sports guy and enjoy watching and playing games. One of the things not many people know about me is that I can play the ukulele and guitar.

Why do you play football? Who or what motivates you the most?
I love playing sports and football is one of my passions. I enjoy the process of developing into the best version of an athlete that I can be and being part of a great team. Football is great because it’s a team-oriented sport where you have the opportunity to develop lasting relationships. Being part of that family is great. Yet, being able to have success and celebrate with one another is like heaven.