It’s probably safe to say that everyone has played a game of Monopoly at this point. While it’s an entertaining game (albeit enraging at times), its many geeky alternative versions are just as fun and make for the perfect additions to your board game collection.

We’ve got the perfect Monopoly variant for you, whether you’re into video games, epic fantasy novels, animated films, classic comic books, or multi-movie sci-fi sagas. So next time you’re trying to figure out what to play for Game Night, we think these will keep you, your family, and your friends entertained for hours on end.

If you’ve read one of Marvel’s wonderful comic books and thought, “Hey, I wish I could be Iron Man,” now’s your chance. With the Monopoly Marvel Avengers Edition, you can play as one of 12 characters, including Thor, Hulk, Captain America, Black Widow, Hawkeye, War Machine, Ant-Man, Nebula, Rocket, Captain Marvel, Iron Man, and the Infinity Gauntlet.

The game is packed with plenty of Marvel villains, too, and you’ll need to last longer than your opponents to win. Instead of snatching up properties, this version of Monopoly has you assembling a team of superheroes like Nick Fury, Maria Hill, Iron Spider, and 25 others from the Marvel Universe. And with the Infinity Gauntlet and Stark Industries cards in play, you’ll be fully immersed in this exciting rendition of the classic board game.

Monopoly: Marvel Avengers Edition Board Game for Ages 8 and Up (Amazon Exclusive)

If you're a fan of all things Marvel, you'll love this Avengers-themed version of Monopoly, and its iconic characters and gadgets.


Get Your Arcade On: Monopoly Pac-Man

Admittedly, Monopoly Pac-Man is one of the coolest Monopoly alts, as it comes with a teeny tiny arcade unit that you’ll use throughout the game. In this retro 80s arcade-themed variant, all players get to play as Pac-Man but will also roll a die to move a Ghost token each turn. And instead of buying properties, you’ll buy Levels.

That may not sound super exciting, but the hook of this variant is the Pac-Man banking and arcade unit. Anyone who passes Go has to play the unit, which features mini-games. You can also use the unit to check scores, pay rent, buy and sell Levels, and more. It’s an interesting twist on both games, but it promises to be a thrilling experience for fans of either!

Get Your Arcade On

This fun Pac-Man-themed version will put you right back in the 80s. There's even a mini arcade machine to play when you pass GO.

It’s hard to deny the wonderful charm of Pixar’s animated movies. And with beloved titles like Toy Story, Up, The Incredibles, Coco, and so much more under its banner, it’s no wonder the movie studio expanded into board game territory.

As you work your way around the Monopoly Pixar board, you’ll get the opportunity to purchase famous Pixar movie locations like Porto Corsa from Cars 2 or Nemo’s Anemone from Finding Nemo. Kids and adults alike are sure to have fun with this Monopoly version. There are also fun action squares, like Andy’s Toy Chest, and player tokens like the Pizza Planet truck from Toy Story and Pixar’s ball and lamp. Monopoly: Pixar Edition is a must-have for all Pixar fans!

Are you a fan of Pixar's incredible animated movies? Buy your favorite locations and encounter beloved characters. 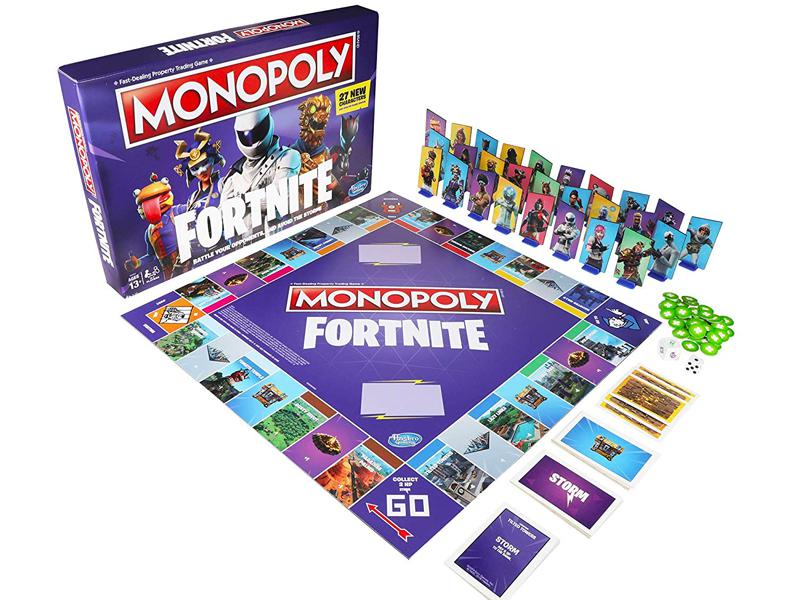 The Star Wars saga isn’t just one of the most popular movie franchises of all time, it’s also one of the most widely merchandised, so it’s no surprise to learn that Monopoly also features a Star Wars Complete Saga edition. The game features artwork inspired by all three trilogies.

Players have nine tokens to choose from, including Luke Skywalker, Darth Vader, Chewbacca, Han Solo, and more. Properties are Droids and planets in this Monopoly iteration, and X-Wings and TIE Fighters replace houses and hotels. There are plenty of cool features here for casual and serious Star Wars enthusiasts alike.

And there’s some good news: this isn’t the only Monopoly–Star Wars option, either. You can also pick up versions focused on The Mandalorian and Boba Fett. Mando’s version features player tokens of (who else) Boba Fett, Ahsoka Tano, and Bo-Katan Kryze, while the Boba Fett game is filled with different versions of Boba, Mandalorian armor skulls and sigils, as well as popular characters, weapons, and locations from the saga.

Revisit the most iconic sci-fi movie saga of all time spanning all nine core films. Hope you have your blaster ready!

If you want to go back to the yesteryear of Game of Thrones (as in, before the terrible series finale aired), Monopoly Game of Thrones is the way to do it. This immersive board game takes you to famous locations like Hardhome, Dragonstone, Winterfell, The Cave of the Three-Eyed Raven, and King’s Landing, which you’ll have the chance to purchase.

Each of the six-player tokens are inspired by the honorary sigils of the Great Houses (sorry, there isn’t a Starbucks cup option, unfortunately). You’ll use holdfasts and castles in place of houses and hotels. There’s even an Iron Throne cardholder with a musical stand that plays the show’s theme song. The game’s Amazon page does list the game as being “adult,” but after looking at the board, reading the instruction manual, and doing some other sleuthing online, there doesn’t appear to be any reason why; we assume it’s just because the show is not kid-friendly.

Travel through Westeros and encounter iconic locations, castles, and enemies along the way.

Here’s the truth: anything with Mario on it is cool, as is anything that celebrates the iconic Nintendo character. So naturally, Monopoly Super Mario Celebration must be the coolest board game on Earth! This all-things-Mario version of the board game features artwork and fan-favorite locations from popular Mario video game titles (ranging from 1985 up through 2017), like Yoshi’s Island, Meringue Clouds, and Bowser’s Kingdom.

Player tokens include a 1UP Mushroom, Koopa Shell, Fire Flower, Yoshi egg, Invincibility Star, and the Super Leaf. Hasbro replaced houses and hotels with Toad houses and Princess Peach’s castles. There’s also a giant Question Block you can press to collect or lose coins and to hear a variety of iconic sound effects like Bowser’s laugh or the Power-Up sound.

Wondering what alternate versions of Monopoly are out there that feature other popular video games? How about this laid-back mashup for Nintendo’s latest Animal Crossing game, or perhaps this stylish Legend of Zelda version? The Animal Crossing version has you collecting resources for Bells (and probably trying to dodge Tom Nook) and is delightfully colorful and sweet. The Zelda version features tokens like the Hylian Shield, Triforce, and boomerang and has an excellently-stylized design across the whole board, making it super immersive.

Play as your favorite Mario characters and encounter iconic places and enemies as you go.

My Precious: Monopoly Lord of the Rings

It makes complete sense that the world’s lengthiest movie series and the world’s longest board game would be a match made in heaven. In this fantasy-laden Monopoly version, you’ll be working to protect Middle-earth from the gruesome forces of Mordor. Player tokens include Legolas, Gandalf, Frodo, Sam, Pippin, Gimli, Aragorn, Boromir, and Merry.

Players will take turns controlling The Ring and reap its benefits; beware, though, that the longer you have The Ring, the more dangerous it becomes. Whoever has The Ring also moves a Ring Tracker toward Mount Doom. If you lose or successfully give away The Ring, the Tracker moves back to the start, delaying the inevitable for a pinch longer.

Monopoly Lord of the Rings

Protect Middle Earth, try and control The Ring, and make your way to Mount Doom.

Of course, board game Jurassic Park promises to be nearly as exciting as movie Jurassic Park. It even includes the park’s emblematic gates, which are electronic and can play music and sound effects from the movie. Instead of purchasing properties, players get dinosaurs like the velociraptor (life goal: achieved).

Players will play as characters from Jurassic Park and race against certain death via the T. Rex token, which also moves around the board each turn. The T. Rex can damage property, forcing players to pay the bank. To balance things out, players can build protective fences once a paddock in a color set is owned; these allow players to charge a higher rent and protect properties from the T. Rex.

Explore Isla Nublar, build protective fences, and run from the Tyrannosaurus Rex in this dino-tastic version!

Survival of the Fittest: Monopoly Fortnite

Love playing Fortnite online with your friends? Well cool, because now you can play Monopoly Fortnite against your friends IRL. However, unlike regular Monopoly, you’ll need to focus on surviving longer than your opponents rather than owning more properties than them. Players will need to avoid The Storm to survive.

The Fornite-themed game board is decked out with well-known locations from the game, and players will work to earn health point chips rather than Monopoly Money to stay afloat. You’ll also need to use loot chest items, and the action die to battle opponents.

Survival of the Fittest

Build, blast, and SURVIVE in this fast-paced version of Monopoly

Leave it to Dungeons & Dragons to be the one thing that could make a game of Monopoly actually feel short in comparison. In Monopoly Dungeons & Dragons, players will buy, sell, and trade their way to victory, collecting monsters like a goblin, lich, tarrasque, Demogorgon, death knight, and more. There are also event locations on the board, like a dragon’s lair.

And just as you would in Dungeons & Dragons, you can play this game with similar race and class combos, like a halfling rogue, human fighter, dwarven cleric, tiefling bard, human wizard, or elven ranger. Choose your character carefully, as they’ll need to survive a variety of tough expeditions and fights against the likes of the Beholder, Storm Giant, and more in this challenging variant.

Like "Monopoly?" Love "Dungeons & Dragons?" Why not play this creative blend of both games!